To mark this year’s Guide Dogs Appeal, Pups to Partnerships, Ant and Dec have had two guide dog pups named after them to highlight the power of a strong partnership. An adorable Yellow Labrador puppy has been named after Ant while the playful Golden Retriever has been named after Dec. The much-loved pair met up with their canine namesakes recently for play and cuddles.

Ant and Dec are supporting this year’s Guide Dogs Appeal which follows the progress of a group of seven puppies. Throughout October, the charity is sharing the journey of the puppies as they progress to become life-changing guide dogs. 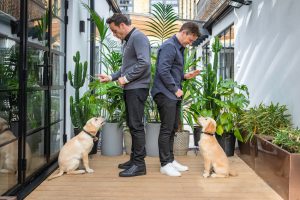 Speaking of the partnership, Ant says: “We’re so proud to be part of the Pups to Partnerships campaign; not only do we get to meet these adorable puppies but we also get to hear about the great work that Guide Dogs does.”  Dec adds: “These puppies will go on to change lives and give two people living with sight loss the independence and freedom we take for granted; we can’t wait to see how these puppies progress.”

Puppy Ant and Dec are currently living with their Puppy Walkers – volunteers who act as canine foster carers for guide dog pups between the ages of seven weeks and 14 months.

Ann Bradford, Puppy Walker for puppy Dec says: “Being a puppy walker is about so much more than walking the puppy, although this is a particularly enjoyable part of the job! It is incredible to be able to give a puppy its first sense of home, nurture its character and help to develop its skills, all the while knowing it will go on to change a life.”

More than two million people are estimated to be living with sight loss in the UK today. It is predicted that by 2050, this number will double to over four million.

The top three causes of sight loss in the registered visually impaired population are, according to Guide Dogs:

The Guide Dogs Pups to Partnerships Appeal is taking place from the 1st to the 31st October 2019. During the month-long campaign, the charity aims to raise £420,000 to fund the life-long journey of 7 puppies, who will become life-changing partners to people in the UK living with sight loss. For more information on how to get involved, visit: www.guidedogs.org.uk/appeal or call 03451 430 192.