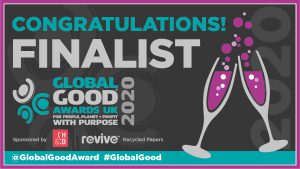 The Global Good Awards are a highlight of the awards calendar, and we were blown away to pick up Gold and Silver awards in the Campaign of the Year category last year for two campaigns with environmental charity Hubbub. So, we couldn’t be more thrilled to be nominated for two Global Good awards in 2020 with Barnardo’s.

We’re finalists in the Best Campaign of the Year Award and the Environmental Behaviour Change Award with Barnardo’s for their Summer Fashion for Every Occasion campaign. The campaign’s objective was to change public  behaviour  around purchasing summer fashion items and drive more people to  Barnardo’s  stores  to buy second-hand items rather than new.

This campaign generated  £118,491  in additional sales at  Barnardo’s charity stores from 26,331 new customers  during the campaign period (8  July- 31st  August 2019) when compared with the same period in 2018,  helping to fund its work to transform the lives of vulnerable children across the UK. While retail outlets generally suffered slow sales last summer, Barnardo’s bucked this trend and continued to outperform the sector with clear year-on-year growth.

We’re also delighted for our fabulous clients, Borough Market and Hubbub, who have also been nominated for multiple awards.

Hubbub are finalists for the Environmental Behaviour Change Award for their Leeds By Example campaign. The effect of this campaign resulted in successfully recycled 1.2 million coffee cups, 140,000 good quality cans and 160,000 plastic bottles and increased number of people recycling in the City Centre from 17% to 49%.

Hubbub’s inspiring leader, Trewin Restorick, is also a finalist in the Individual Leader of the Year Award. From day one, Trewin has put his heart and soul into Hubbub, and under his leadership it has grown to a thriving organisation that has delivered more than 60 trailblazing environmental campaigns in partnership with over 700 partners.

Congratulations to all the finalists in the Global Good Awards.