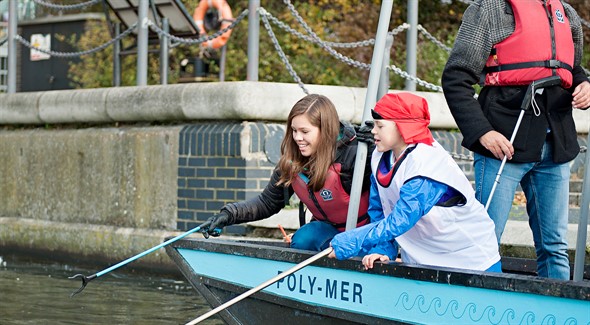 Birmingham has today been crowned winner of the UK’s first ‘plastic fishing’ competition by environmental charity, Hubbub. Following a UK-wide tour, the Poly Roger – a 12-seater punt made from 99% recycled plastic – has been awarded to the Wildlife Trust for Birmingham and the Black Country after it beat organisations in three other cities to win the boat, built to help clean up plastic pollution in UK waterways.

The Poly Roger’s plastic fishing tour started in April, visiting Manchester, Scotland, Bristol and Birmingham, where Hubbub partnered with local organisations and volunteers in each location who had nominated their area to join the tour as part of a competition in partnership with the Daily Mirror. The tour saw residents being taken out on plastic fishing trips to raise awareness of the growing levels of plastic pollution in UK waterways and encourage more people to recycle their used plastic.

The Wildlife Trust for Birmingham and the Black Country was chosen as the winner after 138 volunteers took part in collecting 28 bags of litter in just six days. In the coming months the organisation will use the Poly Roger to offer plastic fishing as part of its ‘Wild Work Days’ initiative which encourages businesses to give something back to the local area.  The Trust will use the boat to help it measure biodiversity in the region and to educate schools, community groups and members of the public further on the issue.

The plastic fishing initiative has come from Hubbub and has been built using funds collected from Starbucks’ 5p charge on drinks purchased in a paper cup across its 950 stores nationwide.  The Poly Roger is only the third boat of its kind in the world and the first to launch outside of London.

The craftsman tasked with building the boat was expert boat-builder Mark Edwards MBE, who also built the Queen’s barge ‘Gloriana’.  The design is based on a traditional punt, but it’s made from the most modern of materials – Plaswood, a hardwearing alternative to wood that is made entirely from recycled single-use plastic – and it’s powered by a rechargeable electric motor making it the most sustainable of boats.

During its tour of the UK, the Poly Roger made 55 trips and took 599 volunteers plastic fishing. Overall, 2,233 plastic bottles and 192 bags of general litter were collected from the UK’s waterways.

Jacob Williams, Community Engagement Officer from Wildlife Trust for Birmingham and the Black Country said: “We’re delighted to have won the Poly Roger! Reducing plastic pollution in the oceans starts closer to home, in our local canals and rivers. It’s going to be a fantastic resource for us to engage communities all over Birmingham and the Black Country so we can work together to clean our waterways whilst showcasing and protecting the vibrant nature and wildlife found around them.”

Gavin Ellis, Co-founder and Director of Hubbub, said: “Plastic pollution in our waterways is widespread so it’s been fantastic to see the Poly Roger go on tour to help tackle and raise awareness of the issue. We were really impressed with the way the Wildlife Trust for Birmingham and the Black Country brought people together to promote plastic fishing in Birmingham during their time with the boat and are really excited to see the good work continue over the coming months. We hope the Poly Roger will make a real difference to the local waterways in Birmingham and act as a constant reminder of the importance of recycling plastic.”

Jaz Rabadia, UK senior manager of energy and sustainability, Starbucks Europe Middle East and Africa, said: “Minimising our environmental footprint and making a positive difference to the planet is a big focus for our business which is why we continue to support Hubbub and initiatives including the Plastic Fishing tour. The tour has been a great success and we’ve been so impressed with how the public has responded and with the organisations involved. The Wildlife Trust for Birmingham and the Black Country is a very deserving winner and we’re looking forward to seeing how it uses the Poly Roger to help tackle and raise awareness of plastic pollution.”

To find out more about plastic fishing across the UK and how to get involved in Birmingham visit www.hubbub.org.uk/plastic-fishing-tour.