Borough Market is London’s oldest food market, having been established over 1,000 years ago.  Today it is a vibrant, diverse market renowned for its exceptional produce, which is run as a charity for the benefit of the community.

Borough Market puts sustainability at the heart of its operations and Barley was appointed in July 2017 to support with sustainability communications. Our first goal was to raise awareness about the new drinking water fountains in Borough Market, alongside an announcement of the Market’s intention to go plastic-free over the next six months. The extensive media coverage included The Guardian, i, Sun, Metro, Telegraph and Evening Standard, BBC London, ITV London and London Live.  Borough Market has since been cited as an example to follow in follow up pieces in The Guardian, Refinery 29, Lonely Planet News, Scotland on Sunday and Mail Online. 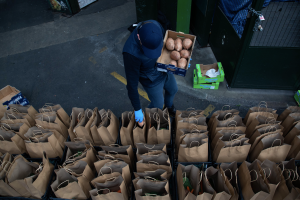 Feed The Frontline is a new charitable initiative which has been established in response to the COVID-19 crisis, delivering thousands of parcels of fresh produce to healthcare workers. Borough Market partnered with Feed The Frontline to deliver thousands of bags of fresh produce, packed and delivered by one of their traders, Borough Turnips, to four London hospitals: King’s College, Whittington Health, Guy’s & St Thomas’ and South London & Maudsley.

We led the media outreach programme and secured 44 pieces of coverage including BBC Radio London, The Daily Telegraph and The Guardian.

Borough Market is London’s oldest food market, having been established over 1,000 years ago.
www.boroughmarket.org.uk