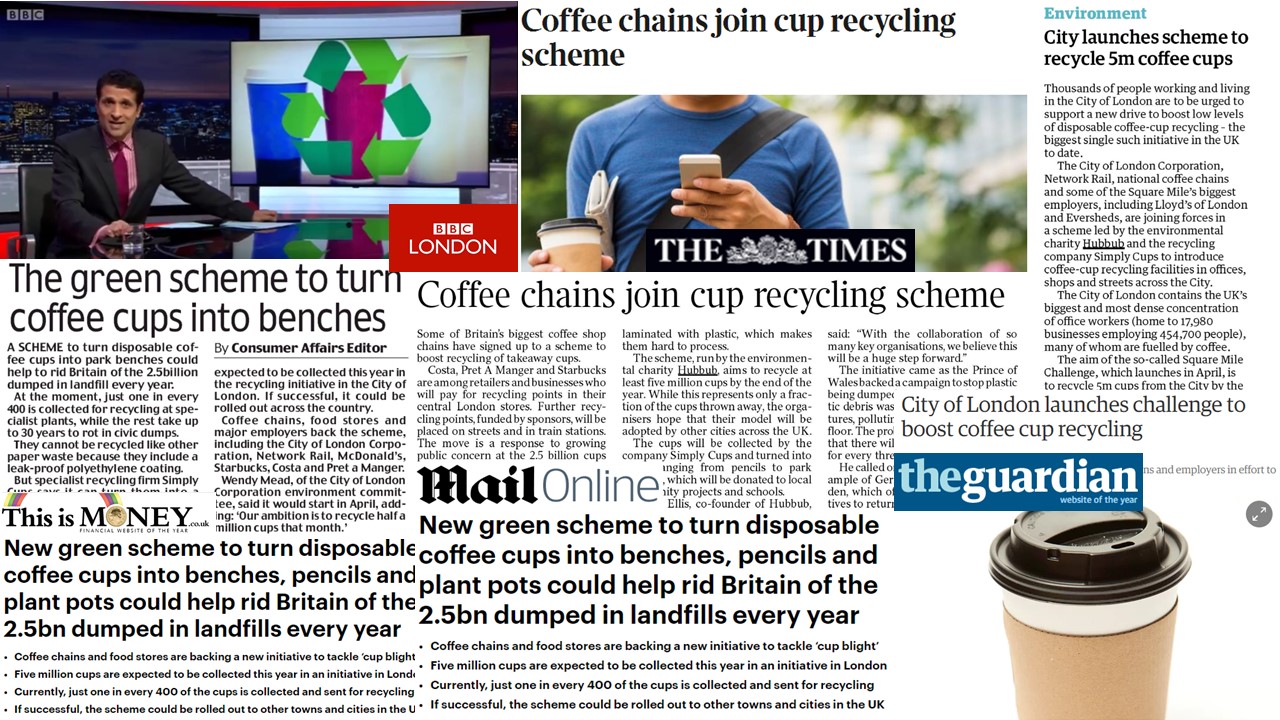 This week we’ve been delighted to support Hubbub in launching the Square Mile Challenge, a new campaign to tackle the tricky issue of coffee cup recycling.

This April will see the launch of the UK’s biggest push to date to tackle the issue of disposable coffee cup recycling. The initiative launches in London’s Square Mile, which holds the UK’s biggest concentration of office workers, many of whom are fuelled by coffee. The City of London, Network Rail, national coffee retailers and some of the Square Mile’s biggest employers, including Lloyd’s and Eversheds, are joining forces in a scheme led by environmental charity Hubbub, in partnership with recycling company Simply Cups, to introduce coffee cup recycling facilities across the city.

Every day up to seven million coffee cups are thrown away across the UK, with less than 1% of these cups thought to be recycled. The tricky issue to date has been the plastic film on the inside of the paper cups, which means that the cups can rarely be recycled with other mixed recycling. The recycling methods used for the Square Mile Challenge will process the cups to create either a plastic or recovered fibre material which is made into new products.

This initiative has been made possible with the support of Bunzl Catering Supplies, Costa, Marks and Spencer, McDonald’s, Nestlé, Pret A Manger, Starbucks and a group of the leading coffee cup manufacturers. It follows the launch of the Paper Cup Manifesto in June 2016, which garnered over 40 signatories from companies involved in the coffee industry, committing to improve recovery and increase recycling of paper cups.

The first 30 businesses with over 500 employees to sign up to the Square Mile Challenge will receive a year’s free membership to collection services provided by Simply Cups, and all other businesses involved can take advantage of discounted rates for collections. The coffee cups collected can be remade into a range of items, from pencils to park benches, which will be donated to local community projects and schools and used to reward those contributing the most to the recycling effort during the challenge.

Support for the launch has been fantastic, with media coverage including The Daily Mail, The Guardian and The Times, in print and online.  The story was also covered on BBC Radio London and on BBC London Evening News and has already generated extensive coverage in trade media.

If you’re based in the City of London and are interested in signing up to the Square Mile Challenge, you can find out more at www.squaremilechallenge.co.uk