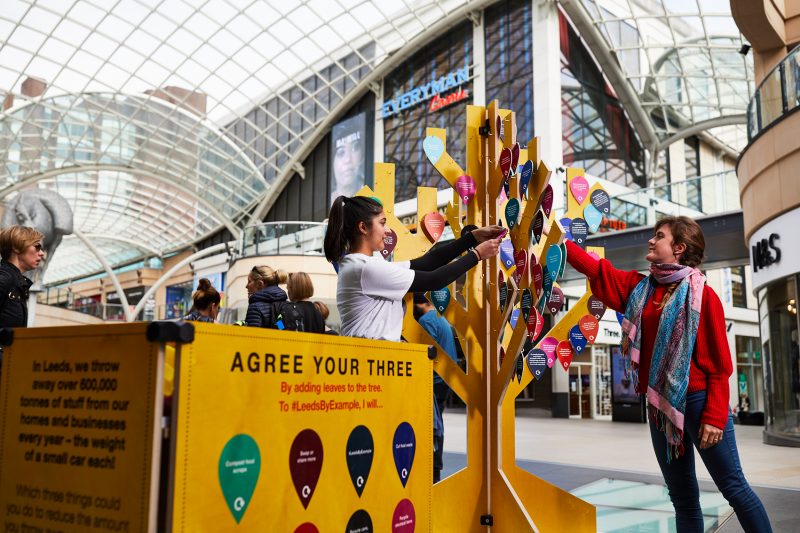 As the UK becomes increasingly concerned about plastic pollution and sustainability, Leeds residents have already shown the rest of the country how keen they are on recycling on-the-go. The pioneering #LeedsByExample campaign to improve recycling on-the-go has proven a huge success. The number of people recycling paper cups, cans and plastic food and drink packaging in Leeds City Centre has almost doubled during the six-month trial, inspiring other parts of the UK to follow suit.

Whilst recycling on-the-go has come a long way, there are still over 600,000 tonnes of waste being thrown away from homes and businesses in Leeds annually according to Leeds City Council – the weight of a small car per resident. However, new research released by the environmental charity Hubbub reveals that the residents of Leeds want to change this, with more than half (51%) saying they want to reduce the amount of waste their household produces.

This enthusiasm in response to the issues of plastic pollution and sustainability has inspired a new phase of the #LeedsByExample campaign. The ‘Agree your three’ initiative will find out how much further Leeds locals are willing to go to reduce the waste they throw away and reuse and recycle more.

In the study of 1,000 Leeds residents, the most common moves currently being taken to reduce waste include:

That said, there seems to be reluctance to seek out other used items such as baby/child equipment (23%) and baby/children’s clothes and shoes (24%).  Currently only 29% are switching the products they buy to reduce packaging, for example having milk delivered in glass bottles or using soap instead of bottled handwash, but 55% said they would be willing to do so in the future.

Now Leeds residents are being asked to join the conversation and vote on the top three small changes they would be willing to make to reduce the amount they throw away, reuse and recycle more, from a shortlist of 10 already popular actions:

Ideas generated will be used by Leeds City Council to develop a city-wide action plan to tackle waste based on what people most care about.

Gavin Ellis, co-founder and director of environmental charity Hubbub, said: “The good news is there is a real appetite in Leeds to reduce waste – more than six in ten people are thinking more carefully about what they buy and half want to reduce the amount of stuff they throw out. We’d like to hear from residents about what they would consider doing to reduce the amount they throw away and recycle more – you can ‘Agree your three’ by visiting the website or our installation at Trinity Leeds.”

Councillor Mohammed Rafique, executive board member with responsibility for the environment, comments, “We are very supportive of the expansion of the #LeedsByExample campaign. I am excited to learn what pledges people will be making across the city. We will work with Hubbub and others, such as Zero Waste Leeds, on how the results of the ‘Agree your three’ can be put into practice.”

To find out more about the ‘Agree your three’ campaign, residents can vote online via www.leedsbyexample.co.uk or in person at a ‘pledge tree’ installation between 29 May – 11 June (11am-2pm) at Trinity Leeds shopping centre.