Alupro represents the UK’s aluminium packaging industry and works to fulfil the industry’s obligation to meet, and exceed, its recycling targets. Alupro engaged Barley to develop a PR strategy that would increase its share of voice in the packaging debate, strengthen its influence on government policy and industry issues, and encourage consumers to recycle more aluminium packaging.

In line with the new strategy, Barley has helped Alupro to influence the debate on the Deposit Return Scheme for drinks packaging which is due to be implemented in Scotland this year. Our high-profile #MakeDRSWork campaign, calling on the Scottish government to introduce a variable deposit based on the size of the container, achieved media coverage across Scotland.  The need for a variable rate has now been recognised by the committee advising the government, with Barley’s work having a significant impact and helping to put Alupro in a stronger position ahead of the next phase of consultations. 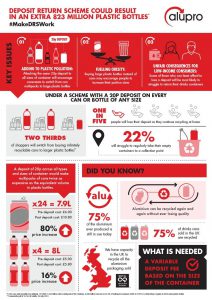