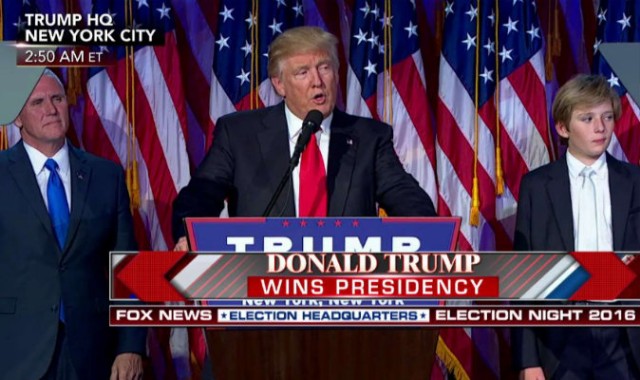 It is difficult to find the words to express how I feel at the news this morning that Donald Trump will be the next President of the USA.  On a personal level, I couldn’t be more appalled that a candidate with a track record of misogyny, xenophobia and bullying is set to be the leader of the western world.  From a professional point of view, the appointment of a man who denies climate change, presents a threat to essential reproductive rights and opposes virtually everything that we at Barley believe matters is just shocking.

So how did we get here?

There are a lot of things that came into play here and no doubt the bones of Clinton’s failed campaign will be picked over for months to come.

There are, of course, a number of parallels to be drawn with the results of this year’s referendum on membership of the EU.  Similar to the leave campaign, Trump’s rhetoric appealed to the ordinary man and presented itself as a vote against a political establishment that many perceive to be at worst corrupt and at best disinterested in and unrepresentative of real people.  As with Nigel Farage, Trump does an incredible job at presenting himself as one of the people – that he understands them and is the best person to represent them.

And maybe that’s where he’s right.  Everything about his campaign suggests that his team has done a far better job of understanding their audience than the opposition.  There’s no doubt that Clinton won the televised debates, but data and reason don’t win hearts and minds.  It’s out on the stump amongst his supporters that Trump won this election.

We would never put a communications campaign together without understanding our audience.  What makes them tick?  What are their hopes and fears, for themselves and for their children?  What do they watch and read?  Who are their influencers?  The understanding and insights from this crucial research are what shape a successful campaign.  Did team Clinton miss this or did they just not dig deep enough?

There can be no broad brush assumptions here.  In both the US and the UK, it would be easy to look at macro economic data and demonstrate that things are getting better.  The problem is that they’re not getting better for everyone.  Both in the US and the UK, there is a widening wealth gap and those who feel they are being left behind are looking for someone to fight their corner.

Yesterday, I spent the day in Margate, in the heart of Thanet in Kent.  It’s Farage country and they voted 64% in favour of leaving the EU.

Much has been written recently about how this classic seaside town, which has been on its knees for years, is making a resurgence.  Millions are being invested in regeneration (with no small irony that much of the funding comes from the EU).  Margate is now being declared the new Shoreditch on sea and property prices rose by 12.5% in the last year.

Without going there, it would be easy to picture a town with its problems solved.

In 2011, The Mirror declared Margate’s Dalby Square a “street of despair”, with 30% of the residents claiming jobseekers allowance.  Yesterday the investment being made in restoring the area was evident.  Half of the square’s buildings were covered in scaffolding as properties are being returned to a habitable state.  But habitable for whom?

As property prices in London continue to rise, Margate is increasingly luring inhabitants and investors from the capital, but are things getting any better for those who’ve spent their lives there?  A short walk away from Dalby Square are found streets full of litter, dodgy deals being done in broad daylight and a large number of people sitting around in the freezing cold with little sign of hope or opportunity.  I came away with the impression of a town that needs a grassroots approach to tackling the intertwined problems of housing, crime, education and employment.  More than that, I came away with a far greater insight into the issues faced by those driving the political shift in this country.

If mainstream politicians want to win over the disaffected voters of both the US and the UK, they need to start listening to and understanding those they seek to represent and talking a language that gives them real hope of change.