An immersive art installation arrives on the riverwalk in London’s Bankside today made of 5,555 paper cups – the number used every minute in the UK. 222 of these are coloured black to represent the 4% of cups which are currently estimated to be recycled in the U.K. At 3 metres tall and illuminated at night, the structure is unmissable, and visitors can walk inside it and it’s also wheelchair accessible. 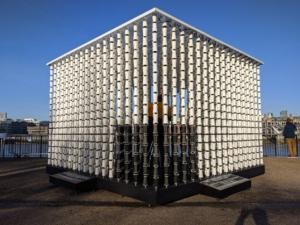 The installation heralds a major push to improve paper cup recycling in high footfall areas across the capital. Five new recycling programmes, financed by The Cup Fund, aim to recycle 4 million more paper cups a year. The schemes are launched as new research1 released today by the environmental charity,  Hubbub, reveals the public are still confused about paper cup recycling. Three out of four people wrongly believe that paper cups can be recycled in the same way as other paper and card. However, because cups have a plastic lining that stops hot drinks from leaking, they need to be collected separately from other paper goods.

The Cup Fund was established to meet this need and is the U.K.’s largest grant fund to bolster and scale paper cup recycling. The London programmes represent five of the 12 schemes across the country selected to receive grants of between £50,000 and £100,000 to develop long-term infrastructure. The Cup Fund is financed by Starbucks, from the 5p charge introduced on paper cups in 2018, to encourage customers to increase their use of reusable cups and avoid the charge.

Each of the five new recycling programmes is tailored to suit the local area, with features including:

All cups collected by the funded projects will be recycled within the U.K. into new products including paper bags and greetings cards. These products will be manufactured locally to reduce travel and some of those products will go back into the locations where the cups were collected to create a closed loop.

As well as financial funding, each project will receive ongoing guidance and advice from Hubbub to enable them to best spend the funds to deliver the greatest long-term impact. The charity has been at the forefront of coffee cup recycling campaigns for a number of years, bringing together large-scale collaborations of retailers, cup manufacturers, local authorities and other stakeholders to test and scale cup recycling in London, Leeds, Manchester and Swansea.

Gavin Ellis, Director and Co-Founder of Hubbub, said: “While reusable cups are the most environmentally friendly choice, billions of paper cups are still being used each year and most aren’t currently recycled. We know that people generally want to do the right thing with recycling and it was surprising to find that three in four people are still unaware that cups need to be collected separately from normal card and paper. By using the Hubbub and Starbucks Cup Fund to raise awareness and introduce eye-catching cup recycling points in high footfall locations, we hope we can encourage Londoners to dispose of their cups in the right bins and ensure that they are recycled.”

Haley Drage Vice President, Public Affairs, Starbucks EMEA, said: “Addressing the issue of waste in and out of our stores is a global priority, and we are tackling this from a number of angles within the organisation—whether it’s reducing the amount of single-use materials we introduce to begin with, encouraging customers to adopt reusables or investing in an alternative cup solution that could transform the industry. Starbucks is proud to be working with Hubbub and The Cup Fund winners to launch five new recycling programmes across the capital, increasing the ease and availability of recycling for Londoners.”

Deputy Mayor for Environment and Energy, Shirley Rodrigues, said: “Tackling waste from disposable cups is a complex challenge and one the Mayor is taking action on. From City Hall, we have installed 3,500 water refilling stations and 61 water fountains across the capital, and it’s great to see the Cup Fund’s five diverse approaches to encouraging recycling in London.

“We know that there is a great willingness from Londoners to ditch plastic bottles and disposable drinks containers, so we welcome action from the commercial sector to facilitate this. Recycling plays an important part in cutting the environmental impact of disposable cups, but our ultimate goal must be to reduce the amount we use in the first place, by switching to reusables.”

The installation was created by acclaimed local art duo, Mule Studio. It will remain in place on the riverwalk in Bankside London, close to Tate Modern, until 31st January, and then moving on to other prime locations across central London, after which all the cups used to build it will be transformed into new usable products.

For more information on The Cup Fund, the winners and their progress visit www.thecupfund.com.