More than 7,000 pupils, across 12 schools, have signed up to Plastic Pioneers a campaign led by environmental charity Hubbub, and sponsored by retailers TK Maxx and Homesense.

The schools benefit from being part of a community stretching from Scotland to the south coast, sharing ideas on how to reduce their consumption of single-use plastic.

As part of the campaign, pupils form a Plastic Pioneers  committee and audit their school’s consumption of single-use plastic. They then advise on – and experiment with – ways to reduce single-use  plastic, coming up with their own initiatives including replacing plastic  bottles with reusable ones, banning yoghurt pots and rethinking lunchtime packaging. 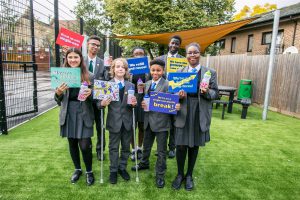 Committee members wear  Plastic  Pioneers  badges to encourage their classmates to think carefully about their consumption of single-use  plastic.

Researchers have found that on average in the UK we each throw away over 34kg of  plastic  packaging every year – nearly the weight of 5,000 pencils. Much of this cannot be recycled and ends up in landfill, floating around in our rivers and oceans.

In December, the government urged schools to stop using single-use  plastic  items such as bags, straws, bottles and  plastic  food packaging by 2022, and to consider environmentally friendly alternatives instead.

Natalie Bayliss, Creative Partner at Hubbub, who is leading the  Plastic  Pioneers  campaign, said each school involved in the campaign has been coming up with different, innovative ways to cut down on single-use  plastic.

“Pupils up and down the country have devised some brilliant ideas – from cutting out  plastic  in canteens to experimenting with alternatives to  plastic  prizes at school events,” she said.

“Single-use  plastic is everywhere and our schools are no exception. It’s so ubiquitous, we often don’t even register it’s there. “And yet it’s having an extremely damaging impact on our wildlife and environment. This campaign helps empower young people to challenge whether single-use plastic really needs to be used and to come up with alternatives.”

A YouGov survey in April showed just under half of us – 46% – feel guilty about the amount of  plastic  we use, while more than eight in 10 of us are actively trying to reduce the amount we throw away.

At Westhoughton High School in Bolton, 35 pupils are on the  Plastic  Pioneers  Committee. They persuaded the school to stop selling bottled water and through the campaign, have provided classmates with reusable bottles, which  Plastic  Pioneers  pupils helped design. They have also removed  plastic  packaging from their canteen.

At Saint Gabriel’s College in Lambeth, the  Plastic  Pioneers  campaign has helped put sustainability at the top of the school’s agenda. Hazel Millar, Head of Key Stage 3 Science and  Plastic  Pioneers  Coordinator, Saint Gabriel’s College, said: “The crucial thing about this campaign is that it is student-led. It has shown my students that they have a voice. Their ideas on how to reduce single-use  plastic  have been taken up by the whole of the school with huge enthusiasm.”

Just as the schools are looking at ways to cut consumption of single-use  plastic,  Plastic  Pioneers  sponsors TK Maxx and Homesense have so far removed the nine biggest contributors to ocean waste  plastic  from their stores and offices. These include  plastic  drink bottles, single use carrier bags, straws,  plastic  cups and non-biodegradable wipes.

Next year, all the schools involved in the  Plastic  Pioneers  campaign will report back on the single initiative that has made the biggest difference to cutting the consumption of single-use  plastic  in their school.