Today the Mayor of London, the #OneLess campaign and MIW Water Cooler Experts announced the installation of three new public drinking water fountains: two in one of the country’s busiest train stations, Liverpool Street, and one in Heart of Valentines Park in Redbridge. These fountains form part of a network of initially 20 fountains which are being installed across London over the coming weeks, with further plans to install more before the end of the year. With this summer being one of the hottest on record, these new public fountains will make it easier for Londoners to keep hydrated on the go without using single-use plastic water bottles, which could end up in the River Thames or our ocean. 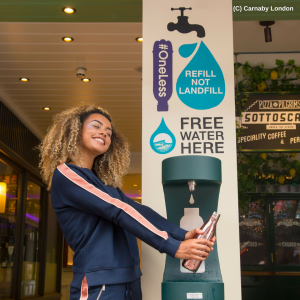 The 20 fountains will go to sites through the London Drinking Fountain Fund, which was set up by #OneLess earlier this year. The sites are a mixture of busy shopping areas, business districts, universities, public visitor attractions, transport hubs, community spaces and public parks. They range from iconic, high footfall areas such as Windrush Square Brixton, the Natural History Museum, and the Horniman Museum and Gardens; to local community areas, such as Camberwell Green, North Acton Station Square, Bexleyheath Town Centre, and Paddington Recreation Ground.

A report released in April 2018 by Keep Britain Tidy and BRITA1 found that 78% of people in the UK would like there to be greater availability of free tap water. This definitely rings true in London – the #OneLess Drinking Fountain Fund received an unexpected number of bids from properties and landowners to take part in the initiative.

“We were taken aback by the number of applications we received to install drinking fountains across London. There is definitely huge appetite in London to stop using single-use plastic and establish a new culture of refilling,” said Dr Heather Koldewey, Director of the #OneLess campaign and Head of Marine and Freshwater at ZSL (Zoological Society of London). “We are delighted to be working with the Mayor of London on this exciting initiative to reduce the plastic blight on the ocean and firmly establish London as a city that no longer uses plastic bottled water.”

The Mayor of London, Sadiq Khan, said: “Water fountains are a simple but effective way to encourage people to ditch daily ‘pointless’ plastic bottles and instead refill reusable bottles. With the hot weather we’ve seen this summer, the demand is greater than ever for quick and easy ways of accessing free drinking water and I’m pleased to confirm the locations for the first of our 20 new public water fountains. Some of these are already attracting thousands of visitors a day and we are working on plans to secure many more across London.”

All drinking fountains in the initiative will be supplied by MIW Water Cooler Experts, a #OneLess champion and partner of the London Drinking Fountain Fund. Mike Winter, CEO of MIW Water Cooler Experts said, “It’s great to see London lead the way in reinstating a public supply of drinking water. Modern refill stations have come a long way from the Victorian fountains that used to fill the city. They’re now robust, hygienic and easy to maintain and there’s no reason why more cities shouldn’t follow London’s example to help people stay refreshed on the go without damaging the planet.”

The first of the new fountains was installed in Kingly Court, Carnaby back in March 2018, in collaboration with property owner Shaftesbury. Since the first week of June, when a water metre was fitted, almost 15,000 500ml bottles have been refilled from just this one unit. #OneLess and the Mayor of London worked with Network Rail to install two fountains in Liverpool Street station earlier this month, which between them have already dispensed 8,000 litres of drinking water, the equivalent of 16,000 water bottles. A further fountain followed last week in Heart of Valentines Park, Redbridge, and at least 16 more will now follow across the capital, accelerating London’s transformation from a city that currently gets through one billion plastic bottles of water a year, to a city where ‘refilling’ rules.

Meliha Duymaz, Network Rail’s route managing director for Anglia, said: “I’m very excited about the benefits the water fountain will bring. Millions of people use Liverpool Street station every day and this free service will make a difference to them and the environment by reducing single-use plastics.”

Leader of Redbridge Council, Councillor Jas Athwal, said: “As part of being a greener borough and a better place to live, we are committed to bringing water fountains and bottle refill points into operation across our borough.  Providing simple ways of refilling and accessing free water not only cuts down on plastic bottle usage but helps people stay healthy and hydrated.  We are delighted to be partnering with the Mayor of London and #Oneless London Drinking Fountain Fund on this new drinking water facility, which I hope will be a popular addition to Valentines Park.”